“În Bucureștiul iubit (In Beloved Bucharest)” is the tile of a film on 8mm shot by Ion Grigorescu in the summer of 1977, on a stroll along the tram line 26. The route followed by the artist captures the changing landscape of the city, from the outskirts turned into neighbourhoods of blocks of flats, industrial areas, towards the modern city center. Populated by workers, cars, and Communist slogans, the Bucharest recorded by Ion Grigorescu resembles an objective view, a sought-after documentary likeness, confronted to the idealising tone of the eponymous song from the ‘50s, whose glorifying lyrics are inserted in the end of the film.

If Ion Grigorescu’s film takes place after the great 1977 earthquake, which forever changed Bucharest’s urban and architectural landscape, clearing the way for the demolishing and restructuring of the city during the Ceaușescu era, the exhibition “In Beloved Bucharest” takes shape in the context of the present pandemic crisis, whose long term consequences on the infrastructure and urban life are still to be experienced, and analysed. The exhibition brings together different views and stances on the experience of the Communist era of the city by Romanian artists representative for the second part of the 20th century, like Geta Brătescu, Florina Coulin and Ion Grigorescu, alongside contemporary critical perspectives of new works created on this occasion by Alice Gancevici & Remus Pușcariu, Ștefan Sava, Mona Vătămanu & Florin Tudor. All the selected artists are either born, have studied, or live / have lived in Bucharest, their artistic practice taking more than once as a starting point images and facts from the city’s urban landscape  and history.

At the suggestion of Ștefan Sava was introduced in the exhibition a work by the regretted artist, curator and art critic Mircea Nicolae (Ionuț Cioană, 1980-2020), courtesy of the family of the late artist.

Below you can find more details on the participating artists.

The project is co-financed by the Bucharest Municipality through ARCUB within the „Bucharest – Open City 2021” Program. 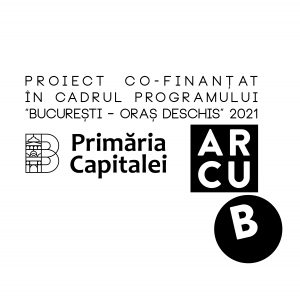 The exhibition can be visited in Ivan Gallery’s space inside Atelierele Malmaison on Calea Plevnei 137C, B side, 1st floor, until November 30 2021, Wed-Sat 2-6 pm, or by appointment outside the visiting hours. Due to the context generated by the COVID-19 pandemic, the gallery visit will be according to the rules established by the Ministerial Order applicable at the time of the visit. The public access to the Ivan Gallery space is allowed based on the documents attesting one of the 3 situations:

– green-pass or proof of vaccination against SARS-CoV-2 virus

Wearing a mask and complying with all health safety regulations in the exhibition spaces is mandatory, and access will be granted only to 15 people at a time.

<< Geta Brătescu (b. 1926, Ploiești – d. 2018, Bucharest) has been a central figure of Romanian contemporary art since the 1960s. An artist with a rich and long career, Brătescu developed a complex body of work that comprises drawing, collage, engraving, tapestry, object, photography, experimental film, video, and performance. She studied at the Faculty of Letters and Philosophy and concurrently at the Fine Arts Academy in Bucharest and worked as an artistic director for the magazine “Secolul 20 [20th Century]”, renamed “Secolul 21” at the turn of the millennium. Geta Brătescu took part in some of the most important contemporary art exhibitions, such as Documenta 14, Athens and Kassel (2017), La Biennale di Venezia (2013), La Triennale, Paris, Palais de Tokyo (2012) and the 12th Istanbul Biennial (2011), to name just a few. In 2017, Geta Brătescu represented Romania in the Venice Biennale with the project “Apparitions”, the first solo show of a woman artist in the Romanian Pavilion. Her most recent retrospective was presented at Kunstmuseum St. Gallen, Switzerland in 2020, travelling in a different version at Kunstforeningen GL Strand, Copenhagen in 2021.

<< Florina Coulin (b. 1947, Roşiorii de Vede, Romania) studied between 1965-1971 inside the Painting Department  of the “Nicolae Grigorescu” Fine Arts Institute in Bucharest (today’s National University of Arts of Bucharest), professor Octavian Angheluţă’s class. After graduating she took part in national and international group shows (in Moscow, Barcelona, Sofia, Stockholm) and in 1975 she became a member of the Romanian Fine Artists’ Union. In 1977 she married Georg Coulin and moved to Germany, where she resumed her artistic career. She joined the Artists’ Union in Augsburg and she took part in solo and group shows in Villefranche (France), München, Vienna, Istanbul, Iowa City (USA), among others. In Romania, Florina Coulin has had solo shows at Galeria Curtea Veche (2006 and 2007, Bucharest), and then at Ivan Gallery in 2019 (“The Hours. Memory Images”), and has participated in the group shows “Ion Grigorescu and friends” (Mogoșoaia Palace, 2003), “This Part That Seemingly Needs to Be Extruded Through a Place in My Body” (Salonul de proiecte, Bucharest, 2019, which travelled in an extended version to Cultuurcentrum Strombeek Grimbergen, part of the Europalia Arts Festival Romania, 2019), “Real Body” (Ivan Gallery, Bucharest, 2021). She lives and works in Augsburg, Germany.

<< Alice Gancevici (b. 1987, Bucharest) & Remus Pușcariu (b. 1986, Bran, Romania) are an artist duo currently based in Bucharest. Their educational backgrounds (visual arts and theatre directing) inform a multidisciplinary approach, which spans across installation, video, objects, plays, a.o. In developing a research-based type of work, they often use empirical observation and ‘theatrics’, i.e. the practice of tropes and ruses, to chart flights of thought present in current social, political and economic contexts. In 2015, they both received a MA degree from the Sandberg Institute in Amsterdam. Their works have recently been shown as part of “Landscape In A Convex Mirror”, Art Encounters Biennale (2021); “Means Of Escape”, Kunsthaus Erfurt (2021); “Remote Complicities”, Salonul de Proiecte (2019). They are co-founders of the curatorial platform Template, and have collaborated between 2012-2020 with Bucharest AiR on a tailored international artists’ residency program running in Bucharest. For the exhibition “In Beloved Bucharest”, Alice Gancevici & Remus Pușcariu have created the new installation “As opportunity affords… / Bucharest Aged Oak” starting from wooden fragments of furniture abandoned in the city space, integrating them in a chemical circuit mirroring the changes that Bucharest, “a city under a lengthy process of truncation and reconfiguration”, is going through.

<< Considered one of the most significant representatives of the experimental and conceptualist art in Eastern and Central Europe, Ion Grigorescu (b. 1945, Bucharest) developed throughout his career a complex artistic practice, difficult to frame from a one-sided perspective. His practice encompasses various media – painting, drawing, photography, film, private performance, object – in documenting aspects of reality which include his own body, family and daily life, as well as the social and political context. His works from the ‘60s and ‘70s, provocative and subversive, search for the contradictions inherent to the ‘objective’ facts, criticising the Communist regime and the dictatorship before 1989. The city of Bucharest is very much present throughout his artistic practice, captured and rendered in photography, film, video, as well as in drawing, painting, etching. Ion Grigorescu participated in exhibitions at the Stedelijk Museum, MoMA New York, New Museum New York, in the Vienna Biennale 2015, the Berlin Biennale 2010, the Venice Biennale 1997 and 2011, the Documenta 12, to name just a few.

<< Mircea Nicolae (Ionuț Cioană, 1980-2020) was a Romanian artist, curator, and art critic who lived and worked in Bucharest. He graduated from the Faculty of Letters at the University of Bucharest and obtained a Master’s degree in the Anthropology of the Sacred Space from the Ion Mincu Institute of Architecture and Urbanism. During the last years of his life he was a doctoral student at the National University of Arts in Bucharest with a thesis on work and artistic freedom in the case of the Romanian art scene, from 1944 to 2010. In his projects, Mircea Nicolae was interested in the urban identity of the city of Bucharest, caught in a process of continuous cultural and economic transformation. Mircea Nicolae analysed these transformations on the material and semantic level with the help of video works. At the same time, he produced documentary photography, using a large format camera. In parallel with his artistic projects, since 2009 Mircea Nicolae had developed a series of curatorial projects, among which the exhibitions “The Absent Museum”, Salonul de proiecte, Bucharest, 2019, part of the program “The Photographic Archive: Transformation of History / Memory and Research,” taking as its starting point the Mihai Oroveanu Image Collection, and “Mattis Teutsch. Avangardă și realism constructiv”, Rezidența BRD Scena9, Bucharest, 2019. Mircea Nicolae’s works have been exhibited at the Venice Biennale (2011), the Vienna Biennale (2015), Electroputere Gallery, Craiova (2015), ArtEncounters Biennale, Timișoara (2017), Ivan Gallery, Bucharest (2017) and The Romanian Cultural Institute, Berlin (2019).

<< Ștefan Sava (b. 1982, Slobozia, Romania) holds a MA from the Photo-Video Department, The National University of Arts Bucharest and also a PhD from the same university, following a research about the Holocaust in Romania. Among the exhibitions he took part in: 2019 “The Photographic Archive and History in Transformation” (solo show, Salonul de proiecte, Bucharest); 2018 “Gates and Ploys. Casting a Shadow” (with Ion Grigorescu, Ivan Gallery, Bucharest); 2016 “The Falling of the Arches”, Riga Photography Biennial (solo show, Alma Gallery, Riga, LV), 2015 “Appearance & Essence”, Art Encounters Biennial (group show, Timișoara, RO), “Mapping Bucharest: Art, Memory, and Revolution 1916-2016”, Vienna Biennale (group show, MAK, Vienna, AT), “Inventing the Truth”, Venice Biennale (group show, The New Gallery of Romanian Institute of Culture and Humanities Research in Venice, IT). Ștefan Sava is a founding member of Salonul de proiecte in Bucharest, a research and production-based curatorial project, currently researching the Mihai Oroveanu Image Collection inside the project “Photographic Image Between Past and Future”. For the exhibition “In Beloved Bucharest”, Ștefan Sava conceived a complex installation of new works made of found elements, conversed and recombined in configurations of “new artefacts”. The installation, titled “A Conversation (with M.N.)”, started from an imagined dialogue with the regretted artist Mircea Nicolae (1980-2020).

<< Mona Vătămanu (b. 1968, Constanţa, Romania) and Florin Tudor (b. 1974, Geneve, Switzerland) are an artist duo based in Bucharest, working together since 2000. Their artistic practice has been described by the Polish curator Joanna Sokolowska as initiating from the attentive observation of reality’s material elements, from which the artists select that which is as marginal as dust, rust, fluff, seeds, soil, while working with such materials articulates novel ways of originating critical proposals that question recent memory / history, social relations, economic and political changes. Among their solo shows are “Omnia Communia Deserta”, La Loge, Brussels (2020), “Prăpădenia pământului”, Salonul de proiecte, Bucharest (2016), “Powerlessness a Situation. Revolutie”, Frankfurter Kunstverein, Frankfurt (2013), “The order of things”, daadgalerie, Berlin (2012), “All Power to the Imagination!”, Secession, Vienna (2009). Their works were exhibited at Galerie fur Zeitgenossische Kunst Leipzig, Centre Pompidou Paris, ms Muzeum Sztuki Lodz, New Museum New York, Stedelijk Museum Amsterdam, ICA London, as well as in the Baltic Triennial 14 (2021), the 10th Shanghai Biennale (2014), Venice Biennale 2007 and 2011, the 12th Istanbul Biennial (2011), the 5th Berlin Biennial (2008). In 2011 they have received a DAAD Berlin scholarship part of the Berliner Kunstlerprogram. In the exhibition, Mona Vătămanu and Florin Tudor present a series of new interventions, conceptually articulated to their 2006 “Văcărești” filmed performance, in which they analyse the city’s layers and temporalities, disclosing the devouring, devastating effects of matter and history likewise.